W H Doherty and Co Ltd was founded in 1934 by William Herbert (Bert) Doherty. In 1998 this company became what we know today as Doherty Hungary Kft. But the origins of the company are from much earlier….

The beginning was sometime in the early 1920's. Jim Doherty (the Great Grandfather of the current Managing Director of Doherty Hungary Kft) founded a company in Digbeth, on the south side of Birmingham, for the production of bicycle components and accessories. It was named J. Doherty and Company. Business was good in those days in England, particularly in Birmingham, where it was acknowledged that one could buy anything from a "doll's eye" to a "railway tunnel". The business prospered and was soon involved in motor bicycle components, in addition to it's original product lines.

The bicycle business was always productive, but the "motorbike" industry had more glamour. Who wants to talk about a pedal bike when one can talk about a motorbike? In those days J. Doherty & Co were the benchmark company for the production of controls and handlebars. It was J. Doherty who first turned the "Bowden" cable and lever into a twist grip. This product had an immediate impact on the motorbike trade worldwide. A massive success! However, it was not patented. 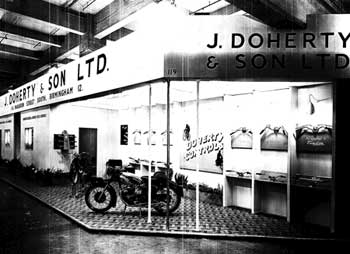 There was an unlimited customer base between the wars. Within a five mile radius of the Doherty factory in Digbeth one would find B.S.A, Matchless, Ariel, Norton, Francis Barnett, Velocette, James and AJS. They were all customers of J. Doherty & Co - how could they go wrong? It was a respected company with innovative ideas and quality products.

But the motorbike business was a "boom" industry, and where there is a "boom" there is also a "bust". In 1932 the Ariel Motorbike Company folded and as a very large customer of J. Doherty and Co it took that company down with it. As in many cases of its kind, there was still good business to be done and all that was needed was enough cash to pay the creditors and get the company running again.

A significant bicycle customer of J. Doherty & Co was the Unique and Unity Cycle Company. This was owned by the Munn family, whose daughter was recently married to Jim Doherty's eldest (of three) son. He was also called Jim Doherty. Mr Munn provided the money for his son-in-law to buy the business out of insolvency, and the company was then renamed J. Doherty and Son. Jim Doherty (junior), who had found the money to regenerate his fathers business, then sacked his two younger brothers. One of those brothers, Bert Doherty set up business on his own and founded our company as it is today - W.H. Doherty & Co. in 1934.

The original business continued serving the cycle and motorbike trade until the 2nd World War. It then came under Government control and produced according to their requirements. After the war, once again the business grew. Germany, France and Italy were in tatters and nobody gave a thought to the Far East. The running of the factory was left to the managers and an evermore militant workforce. In those days it is acknowledged that British management as a whole took it's "eye off the ball". So, when firstly Italy and then Taiwan started to penetrate our own market, our companies were unprepared.

To try and compensate for a lack of competitiveness J. Doherty and Son bought a much larger company, Frank Ashby, and tried to expand its market cover. This led them into the British automotive business. This industry was already under severe pressure, due to lack of management foresight and rampant trade unionism. The result was inevitable and the company went out of business forever in 1965.

W.H.Doherty & Co, however, fared better in these difficult times and although one can see with hindsight that mistakes were made, the company took, and still has, a forward looking prospectus. Maybe that is why we are operating in the twenty first century, in Hungary, with Bert Doherty's son and grandson still in command.